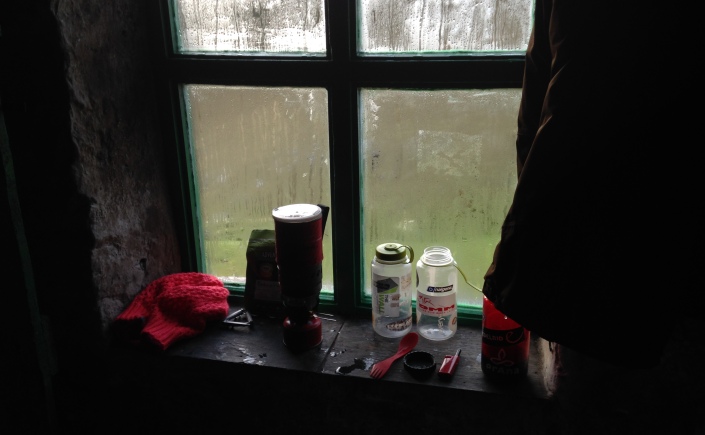 October signaled wet weather in the UK. Keen to push on with the Microadventure 365 challenge I set out once again, although I had to concede that roofed accommodation was a good choice.

In the summer I moved to Worcester, a new city to me where I only knew around five people none of which were overly interested in the outdoors. While I waited for my job to start I managed to pick up some shifts in  a local outdoor shop. I was pleased to find one of the guys there already knew all about Microadventures and another who is a keen walker and camper and happy to have the excuse for more time outdoors. Quickly a plan was hatched and we were off to Snowdonia for the weekend. 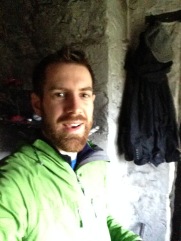 I love Snowdonia. It holds many memories for me from when I graduated, from walking in the Peak District to exploring the mountains, scrambles and rock climbs of Wales. This was when I was aged around 15-19 and struggling with teenage life as many of us did or still do. I found the sense of adventure and achievement refreshing and inspiring as I wrestled with my final years at school. I have enjoyed many adventures there ever since and try to make a point of visiting at least once a year. A personal highlight was in 2011 when I successfully completed the 14 3000’s of Wales with a great friend.

As we left the car it was already dark and raining as we started the steep ascent up the side of the Carnedds. Tom had had to pull out at the last minute so it was just Iain and myself for the trip. After a long and damp climb we arrived at a very soggy tarn that was to be our home for the night and after pitching the tent on the least wet piece of ground we could find we tried to settle in for the night. I awoke the next morning having slept for about two hours between the continual buffeting of the tent by the wind and rain and the occasional look outside to make sure the porch hadn’t blown away. Luckily Iain was also able to see the funny side of the situation and as we got in with our boil in the bag breakfast and coffee the hilarity was added to further when I found my right boot had blown out of the porch and was now literally filled with water (I still think Iain pushed it out). After further laughter we set off again into the cloud.

There was nothing notable about our walk over the Carnedd’s. It was wet, there was nothing to see and to be honest I wondered why I was even there. We tried to make the most if it, chatting as the wind allowed. We could not have been happier as we descended from the Carnedds and finally dropped below the cloud. After passing a lovely picturesque quarry we found the only thing that had kept us going- as we rounded the corner we saw a old stone shepherds hut which was to be our home for the next 24 hours. 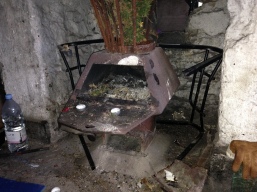 A fire place was a welcome exchange from the tent.

I don’t know if you have been to a Bothy, but if you haven’t you should. They are scattered across England, Scotland and Wales and are open and free of charge to stay the night. They are often overseen by the Mountain Bothy Association (www.mountainbothies.org.uk) but most keep running on good will and responsibilities taken care of by volunteers. They are often quite basic but usually have a fire place, walls and a roof; what more could you need?

As we arrived the door swung open and we were greeted by a smiling face: “Are you coming in?” I explained that would very much like to given the weather and we were welcomed inside. Then came the next question “Do you have any wood for the fire?” I looked at Iain, he looked and me and we both looked at the floor. Bothies are a wonderful shared space that ask very little but the there are two rules that really must be adhered to:

We explained that we did not as we had not been planning to stay but had more retreated there to get out of the rain. Again we were greeted with a smile as a second walker emerged from the other room and greeted us with the warm offer, before even exchanging names, “Would you like some Port?”

What followed can only be described as excellent- for the rest of the day we sat chatting, eating, drinking and trying to make whatever small pieces of wood and heather we could find last as long as possible in the fire. There was a warmth greater than that of the small fire and it reminded me of the warmth and sense of community and fun I had found when I first discovered the outdoor community fifteen years before.

The short walk to our lift was a welcome surprise compared to the planned route back over the Mountains.

As the evening rolled on another couple arrived, greetings were exchanged and two more seats were pulled up by the fire. The model continued; polite questions about each others day were asked and answered, everyone smiled as they thought back to the bad weather we were so happy to have escaped and before we knew it we were all once again laughing and chatting as if we had known each other for years. Eventually we all drifted off to sleep by the last few twigs in the fire, happy that we had walls and a roof to keep us dry and safe. As we awoke and breakfasted Iain and I were less than amused by the idea of a fourteen mile walk back over the Carnedds in soaking wet kit in the wind and rain. I could not have been happier when without a word from ourselves the question came “Would you like a lift?” Within and hour we were all back at the car park. Seven of us loaded into a 4×4 and promptly delivered back to our car. At the end of a brilliant twenty four hours I thanked our new friend and offered him some fuel money for the journey. He simply smiled and replied “Next time you are in a Bothy, Leave some logs for the next people.”