“What am I doing here? I’m a grown up with a nice house and a wife!” I exclaimed while laughing. I had just got into my bivi bag under the tarp. I was in a small patch of woodland squeezed between a country park and a golf course on the outskirts of Birmingham. 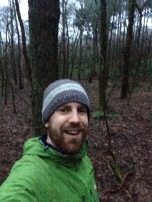 Let me take you back a few hours to three friends gathering together in a pub garden having a beer on a Saturday evening. Only it’s January, its raining and one of the three is refusing to go inside the pub for any reason as he is wearing waterproof trousers. I loved this Microadventure. It is probably the most authentic one I have done yet. Iain and Tom had finished work two hours before and had to be back in again at 10am the next morning meaning we had no chance of going away for the weekend. It was the perfect chance for a night out.

We finished our beer and decided it was time to make our exit. The lady on the next table had clearly had a few and her chat up lines were terrible. Within five minutes we were walking along a muddy footpath in search of our bed for the night. As we approached the top of the hill we emerged from the woods and were met with an amazing view looking out over the lights of Birmingham. Despite a little rain the sky seemed clear and we could see all across the city as people carried on with their evenings activities. It would have been a great place to stop on a dry night but the rain and a nearby car park made it too much of a risk. Instead we pushed on.

The man who brings scented candles on a Microadventure

Soon we had found a quiet spot in the woods that was at least a little bit less muddy, and being vaguely flat it seemed like a fair spot for the night. This is where I was introduced to a great idea. Iain in his wisdom had brought a pack of tea lights with him. This was a great way of providing some natural light for the bivi that was neither too bright or likely to attract as much attention as a torch would. Secondly they did have a surprisingly noticeable warming effect once we were under the tarp. However, Iain being Iain had insisted on bringing Strawberry and Pomegranate scented tea lights that added a slight questionable edge to the experience that prompted much joking throughout the evening.

The next point of humour was when it came to building the shelter. We had all agreed to bring a tarp, the thinking being that three would be plenty to keep us off the mud and covered from the sky that threatened rain. Iain had decided on a bright yellow tarp. Not the best and it was quickly confined back to his bag for the night. Over to Tom. Tom is usually somewhat reliable and with some sizeable microadventure experience I was expecting good things. What was produced next could maybe be described as a waterproof green table cloth. I say maybe, as this may be a little generous. 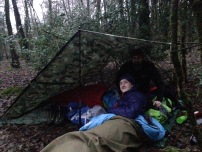 Waking up from a good nights sleep

After much joking and general laughing at Tom’s expense we actually managed to build a pretty good shelter using the table cloth, the third tarp, a pair of walking poles and some bungees. I climbed into my bivi bag and spent the next hour or so sipping port and chatting. I gently drifted off to sleep enjoying the fresh air as I smiled at our creativity and choice of recreation.

Sometime later I awoke, it was light and I felt rested and refreshed. Within a few moments Iain and Tom had also awoken and a flask of coffee was being passed around. The tarps came down, sleeping bags were packed away and we were off on our way. As I looked back over the site I was pleased to see you would not have been able to tell we had been there. As we walked out onto the golf course I was slightly surprised to see more than one pair of golfers already half way through their 18 holes despite the fact it was still only 08:30. In another ten minutes I was back in the car on the way home and Iain and Tom were on their way to work. A proper 5-9 Microadventure.