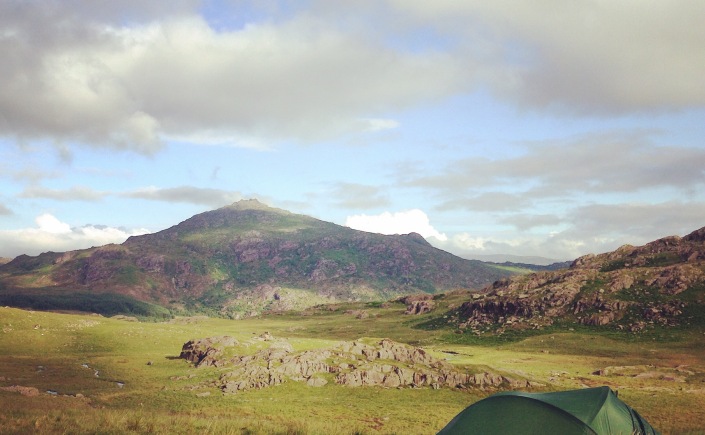 I lived on the edge of the Lake District for nearly ten years. I loved it there. The Lakes, Rivers and Mountains were like a giant play ground to explore. I studied there and I learnt there. I’ve long-lost count of the days I have walked, scrambled and climbed on the Mountains or the numerous days seeking adventure on the many rivers and lakes it has to offer. But as with all things time moves on and after almost a decade I was ready for a new challenge in a new location. 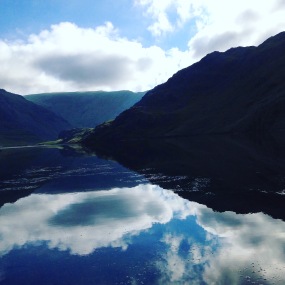 As a awoke the sun was shining upon the water

Last week saw me have four days off work and a quick phone call found me a climbing partner and an excuse to head up early on the Thursday before joining a group I know on the Saturday. By Thursday night I was on a stop over in Lancaster to pick up my climbing partner and see my family who I was overdue a visit. Friday did not start as a promisingly as I would have hoped as I drew back the curtains to see grey overcast skies and the drops of rain could be heard bouncing from the pavement. Never-mind, Lancaster is a wonderful City to pass the time in with its History and Architecture. A Full-English and a guide-book purchase later the weather turned and we were back to the plan.

Farleton Crag is in Lancashire and can be seen as you make your way along the M6. It has good road access and a short walk in even if parking is limited. I don’t know how many times I have been to Farleton. I learnt to climb there, did a day of my climbing instructors training there and have taken many groups and friends there over the years. However it has been at least five years, probably more, since I last visited. Its short clean single pitch limestone make it ideal for a quick afternoon out and with grades from Diff to somewhere in the E numbers it has a lot of offer. What followed was an afternoon of smiles and laughter as we scaled the crag re-discovering its joys and reminding me how much I enjoy outdoor climbing. Soon it was time to go and after a quick detour back down to Lancaster I had resupplied with Milk and Beer and was off for stage two.

The view from Farleton Crag out over Morecambe Bay

It took me a long time to venture into the South Lakes. When I moved to the North Lakes I had little knowledge or experience of the area so I just started on my doorstep and worked outwards. Towards to end of my time though I began to spread further afield and aided by the offer of regular work in the South Lakes I found I spent less time in my familiar localities of Derwent and Ullswater and started to discover a whole new world of Coniston and the Western Fells.

No blog would be complete without a micro-adventure of sorts so with twenty-four hours until I was due to meet up with my friends I felt like a child unleashed into a play area as I pulled into a remote parking spot high far from any main roads or civilisation. Yes it was 11pm, yes it was dark, but when you are an adult with the correct level of experience and know how there are few rules when it comes to staying up late and being outside. I set off along a well used bridal way winding up the fellside in search of Seathwaite Tarn. Seathwaite tarn is an amazing place where the beauty of the natural world meets the resourcefulness of the modern world as it is contained on one end by a dam. After walking for around forty minutes I was soon to arrive at my home for the night. 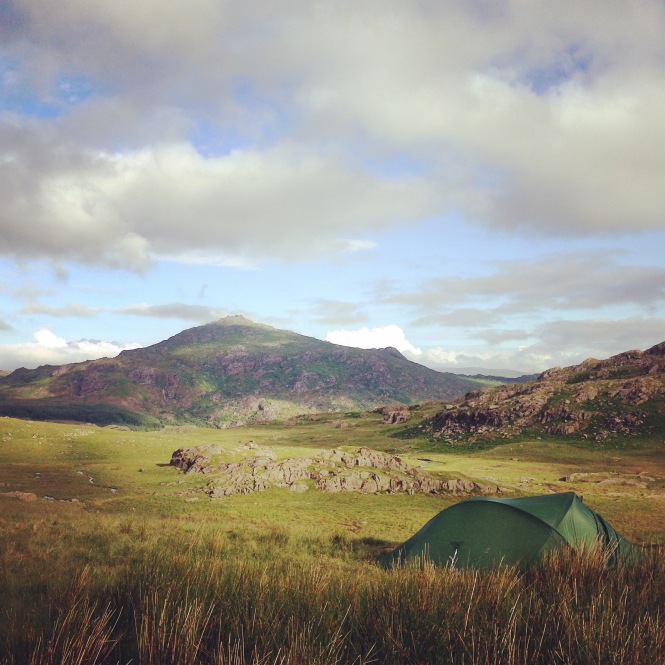 My home for the night looking out onto Harter Fell

I pitched my tent on a suitably soft patch of grass and wondered back across to the dam wall a few meters away. At that point I looked up at the stars and relaxed in the knowledge I was completely alone. As midnight passed I sat leaning against the Dam wall enjoying a 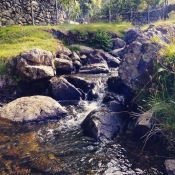 A cold and refreshing place to wash and start the day.

beer and taking in the silhouettes of the mountains that were still just about visible on the ridge lines above.A Peaceful nights sleep followed and I awoke to a bright and sunny day as I emerged from my tent. I made breakfast and took time to explore the Dam and its workings.   I found myself running along the Dam and jumping from stone to stone as I moved across the edge of the tarn. I felt a sense of freedom and energy that had been lacking for a few weeks prior to the trip. After I calmed down I wandered through the Dam workings trying to find where water entered into and out of what I assumed was a hydro-scheme. After I calmed down I returned to my now familiar sitting spot in the sun. I fired up the stove and another cup of tea later I was on my way down. 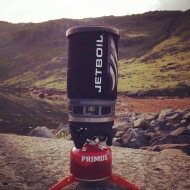 As I arrived back at the car I met a group of people heading up in the direction I had come from about to spent the day volunteering on an archaeological dig that was happening with aim of trying to learn more of the hills past from times long ago when people had lived higher up into the fells. After a brief chat they disappeared up the hill and I refreshed myself with a wash in a cold mountain stream. I looked at my watch to find it was still early and some hours until I was due to meet my friends. After a few minutes consideration I was off back to Broughton for a visit to a most excellent bakery and a tour of the beaches on the west coast. Memories flooded back as a re-visited the sites and places I use to surround myself with so regularly. After an hour wandering on the beaches it was time to move on. I drove up the West coast of Cumbria on the way to meet my friends happy to be back with a feeling of fulfillment in the land I have explored the most, dreaming of what adventure the summer may have in store.